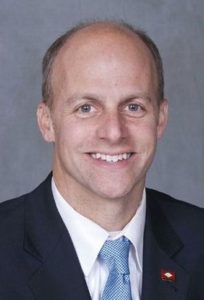 Files, 45, of Fort Smith, Arkansas, a Republican who represents Arkansas’s state legislative district No. 8 in the Arkansas State Senate, pleaded guilty before Chief U.S. District Court Judge P. K. Holmes III of the Western District of Arkansas to an information charging him with one count of wire fraud, one count of money laundering and one count of bank fraud.

As part of his plea, Files admitted that, between August 2016 and December 2016, while serving in the Arkansas State Senate, he used his senate office to obtain government money known as General Improvement Funds (GIF) through fraudulent means and for personal gain.  Specifically, Files authorized and directed the Western Arkansas Economic Development District, which was responsible for administrating the GIF in Files’s legislative district, to award a total of $46,500 in GIF money to the City of Fort Smith.  To secure the release of the GIF money, Files prepared and submitted three fraudulent bids to the Western Arkansas Economic Development District. Files then instructed an associate to open a bank account under that person’s name to conceal his role as the ultimately beneficiary of the GIF award.  When a first installment of approximately $25,900 was wire transferred from the City of Fort Smith to the associate’s bank account, the associate withdrew approximately $11,900 of the funds in a cashier’s check made payable to FFH Construction, Files’s construction company, and the rest in cash.  The associate then hand-delivered the check and the cash to Files who, in turn, deposited the check into his personal bank account.

Files also admitted to submitting a materially false loan application in November 2016 as part of a scheme to secure approximately $56,700 from First Western Bank.