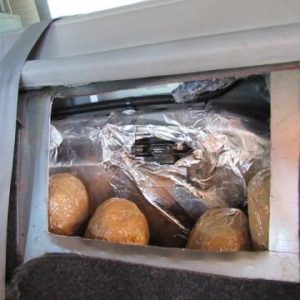 Officers removed 30 packages of meth from behind the back seats of a smuggling vehicle. Photo: U.S. Customs and Border Protection

Officers referred a 39-year-old Cashion, Arizona woman for additional questioning as she attempted to enter the U.S. from Mexico yesterday afternoon in her Toyota sedan. After an alert to the presence of what it is trained to detect by a CBP canine, officers discovered 30 packages of meth behind the vehicle’s back seats of almost 33 pounds, worth nearly $98,000.

Last night, officers at the Pedestrian crossing referred a 17-year-old San Luis, Arizona girl for further inspection as she attempted to re-enter the U.S. from Mexico. A search led to the discovery of a pair of packages of meth wrapped around her midsection, weighing almost three pounds, worth $7,900.

CBP officers seized the drugs and vehicle, and both subjects were arrested and turned over to U.S. Immigration and Customs Enforcement’s Homeland Security Investigations.