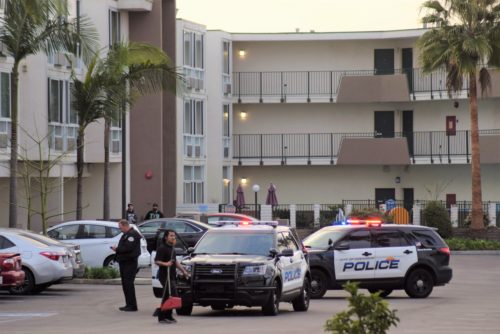 Oceanside police officers responded to the Rodeway Inn at 1103 North Coast Highway for a reported shooting.

Police officers arrived on scene and spoke to the reporting party who alleged a male, later identified as Jason Rodriguez, 21, had shot at him while both parties were standing in the parking lot of the motel. The shooting reportedly followed an argument and altercation that occurred minutes before as both men were driving in separate vehicles in State Route 76 near Interstate 5.

After the shooting, Rodriguez entered his rented room at the Rodeway Inn.

Additional police officers arrived at the motel to contain the suspect and to evacuate those in nearby rooms and buildings.

After communicating with authorities Rodriguez exited the motel room and surrendered to officers without incident.

Rodriguez was booked into the Vista Detention Facility for assault with a deadly weapon.