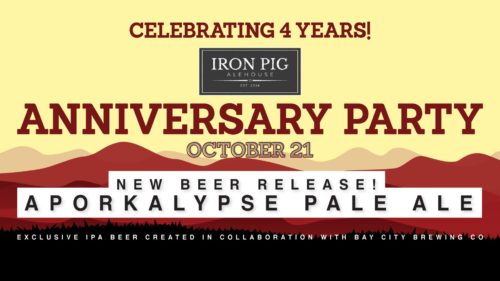 SAN DIEGO–Who doesn’t love the smell of barbecue in the morning? On Sunday, October 21, Iron Pig Alehouse will celebrate its fourth year of business with a community focused event, Aporkalypse Now.

Bay City Brewing Co. holds community at the core of its mission: create unique and delicious craft beer for everyone to enjoy. With this in mind, the brewery teamed up with Iron Pig Alehouse to create the Aporkalypse Pale Ale. With a six percent alcohol by volume (ABV) ratio, the Aporkalypse Pale Ale highlights flavor notes of pineapple, mango, grapefruit and melon paired with Zythos and El Dorado Hops, creating a great tropical aroma followed by an easy drink. Two whole pigs will be smoked for the anniversary celebration and will feature a few Iron Pig fan-favorite specials for the day: Pulled Pork Sammies and Pulled Pork Plates.

Founded in October 2014, the popular BBQ joint in Pacific Beach boasts a modern take on traditional Texas smoked barbecue, which made it one of the most anticipated restaurant openings of the season, according to Eater San Diego. Since its inception, Iron Pig Alehouse has evolved into a fun community hangout spot that is highly involved in supporting local businesses, organizations and individuals.

“When we embarked on this journey four years ago, we never expected to be welcomed so warmly by the Pacific Beach community,” said Brigette O’Donovan, one of Iron Pig Alehouse’s founding partners. “Since opening day, we have experienced a sense of community unlike anywhere else, which is why we work so hard to not only embrace our beach family, but to give back to it in any way we can.”

Iron Pig Alehouse regularly supports local nonprofits through events and other philanthropic initiatives. As part of its anniversary event, the restaurant will partner with RouteUSA, a local non-profit dedicated to promoting sports, creativity, education and the awareness to preserve the health of the world’s oceans, beaches and marine life – with the following activities:

Throughout the month of October, Iron Pig Alehouse will display an art exhibit of pieces created through the organization’s Art Route program. All artwork will be for sale, with proceeds benefitting RouteUSA.
On Sunday, October 14 from 10 a.m. to 12 p.m., Iron Pig Alehouse invites the Pacific Beach community to participate in a beach clean-up day in Pacific Beach. All participants will receive a coupon good for a one-cent beer or drink at Iron Pig Alehouse that same afternoon.

Iron Pig also will hold a revenue giveback on Tuesday, October 16 benefitting the Pacific Beach Middle School Band.
During the fourth anniversary event on October 21, Iron Pig Alehouse will host an interactive art project on the patio with items collected from the beach cleanup. Guests are invited to help create an art piece that will be hung at the restaurant. A portion of the day’s sales will benefit RouteUSA.