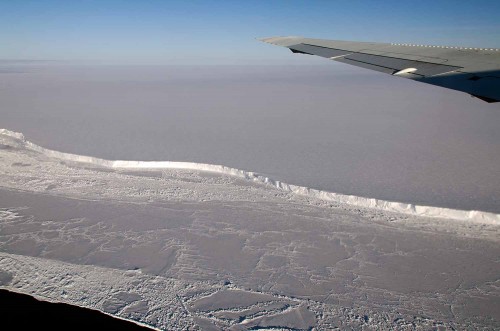 LA JOLLA–A new study led by Scripps Institution of Oceanography at UC San Diego researchers has revealed that the thickness of Antarctica’s floating ice shelves has recently decreased by as much as 18 percent in certain areas over nearly two decades, providing new insights on how the Antarctic ice sheet is responding to climate change.

Data from nearly two decades of satellite missions have shown that the ice volume decline is accelerating, according to a study published on March 26 in the journal Science and supported by NASA. Scripps graduate student Fernando Paolo, Scripps glaciologist Helen Amanda Fricker, and oceanographer Laurie Padman of Earth & Space Research (a non-profit institute specializing in oceanography research) constructed a new high-resolution record of ice shelf thickness based on satellite radar altimetry missions of the European Space Agency from 1994 to 2012.

Merging data from three overlapping missions, the researchers identified changes in ice thickness that took place over more than a decade, an advancement over studying data from single missions that only provide snapshots of trends.

Eighteen years of change in thickness and volume of Antarctic ice shelves. Rates of thickness change (m/decade) are color-coded from -25 (thinning) to +10 (thickening). Circles represent percentage of thickness lost (red) or gained (blue) in 18 years. The central circle demarcates the area not surveyed by the satellites (south of 81.5ºS). Background is the Landsat Image Mosaic of Antarctica (LIMA). Credit: Scripps Institution of Oceanography, UC San Diego

Total ice shelf volume (mean thickness multiplied by ice shelf area) across Antarctica changed very little from 1994 to 2003, then declined rapidly, the study shows. West Antarctic ice shelves lost ice throughout the entire observation period, with accelerated loss in the most recent decade. Earlier gains in East Antarctic ice shelf volume ceased after about 2003, the study showed. Some ice shelves lost up to 18 percent of their volume from 1994 to 2012.

“Eighteen percent over the course of 18 years is really a substantial change,” said Paolo. “Overall, we show not only the total ice shelf volume is decreasing, but we see an acceleration in the last decade.”

While melting ice shelves do not contribute directly to sea-level rise, the researchers indicate that there is an important indirect effect.

Schematic diagram of an Antarctic ice shelf showing the processes causing the volume changes measured by satellites. Ice is added to the ice shelf by glaciers flowing off the continent and by snowfall that compresses to form ice. Ice is lost when icebergs break off the ice front, and by melting in some regions as warm water flows into the ocean cavity under the ice shelf. Under some ice shelves, cold and fresh meltwater rises to a point where it refreezes onto the ice shelf. Credit: Helen Amanda Fricker, Professor, Scripps Institution of Oceanography, UC San Diego

“The ice shelves buttress the flow from grounded ice into the ocean, and that flow impacts sea-level rise, so that’s a key concern from our new study,” said Fricker.

Under current rates of thinning, the researchers estimate the ice shelves restraining the unstable sector of West Antarctica could lose half their volume within the next 200 years.

“This work demonstrates the power of satellite observations to understand change in the great polar ice sheets,” said Thomas Wagner, Program Manager for Cryospheric Sciences at NASA Headquarters. “And with data spanning decades, we can understand some of the most important changes and their implications for sea-level rise.”

Fricker said future studies will concentrate on the causes behind changes in ice shelf volume, including the effects of the atmosphere and ocean.

“We’re looking into connections between El Niño events in the tropical Pacific and changes in the Antarctic ice sheet,” said Paolo. “It’s very far apart but we know that these teleconnections exist. That may ultimately allow us to improve our models for predicting future ice loss.”