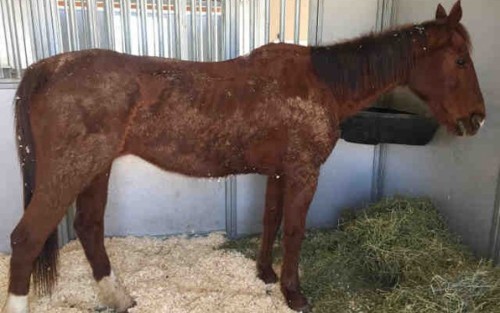 A mare was found in failing health at boarding stable in Bonita. Photo: Animal Services.

SAN DIEGO–A horse described as just “skin and bones” is now recovering at the County Animal Services’ facility in Bonita after being rescued from a boarding stable Monday.

Animal Control officers went to the Tijuana River Valley stable after getting a phone call about a horse that lacked food and water, was emaciated and appeared in failing health.

They found a very underweight 7-year-old mare with a sore on her withers, shoes on her back feet that should be removed, and only nails remaining from the shoes that were missing on her front hooves. The owner was boarding the horse at the facility but was responsible for providing food and water to the animal. Others at the stable told Animal Services the owner has said he was just going to let the horse die.

“If you have an animal, you owe it to that animal to provide nutritious food and veterinary care and not simply say we’re going to let it die,” said County Animal Services Deputy Director Dan DeSousa. “This horse was in horrible shape.”

The horse, named Molonko, is now under the care of the department’s veterinary and animal care staff and is in guarded condition.

This is the third time County Animal Services has been called out to check on the mare. In 2013, the horse was reported to be underweight and the animal control officer educated the owner regarding proper feeding protocols. In 2014, the horse had gained some weight from when it was last seen the previous year. However, this time, the horse’s weight had dropped dramatically so the mare was seized to provide lifesaving care. The owner has ten days to request a hearing to contest the seizure.

County Animal Services is investigating the case to determine whether misdemeanor or felony animal neglect charges should be submitted to the District Attorney’s Office for prosecution.