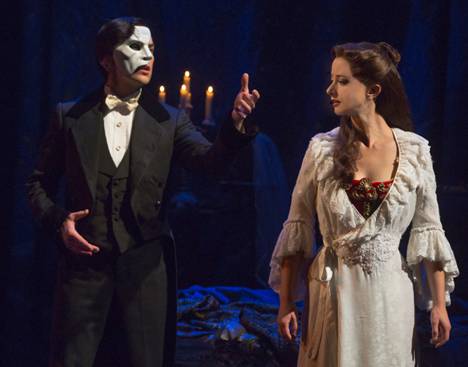 Phantom of the Opera returns to the San Diego Civic Theatre in Oct.

With newly reinvented staging and stunning scenic design, this new version of Phantom, one of the most successful musicals of all-time, will be performed by a cast and orchestra of 52, making this one of the largest productions on tour in North America.

“It’s wonderful to have a new production of Phantom touring America now that the show has celebrated 27 years on Broadway,” Andrew Lloyd Webber said. “Director Laurence Connor has done an amazing job and this production has received huge critical acclaim in the UK.”

”After a glorious celebration of 27 phenomenal years on Broadway with no end in sight, I’m delighted that this dazzling new production of Phantom has been phenomenally well-received by both audiences and critics alike in the U.K. and now the U.S. With an exciting new design and staging, retaining Maria Björnson’s amazing costumes, I am confident North American audiences will fall in love with the Phantom in his new guise — for the first time or all over again,” Cameron Mackintosh said.

This new production of The Phantom of the Opera is directed by Laurence Connor (the 25th anniversary production of Les Misérables now on Broadway) with choreography by Scott Ambler, set design by Paul Brown, Tony Award-winning original costume design by Maria Björnson, lighting design by Tony Award-winner Paule Constable, sound design by Mick Potter and musical supervision by John Rigby. The production is overseen by Matthew Bourne and Cameron Mackintosh. The Phantom of the Opera has music by Andrew Lloyd Webber; lyrics are by Charles Hart (with additional lyrics by Richard Stilgoe) and the book is by Richard Stilgoe and Andrew Lloyd Webber. Orchestrations are by David Cullen and Andrew Lloyd Webber.

There are currently eight productions of The Phantom of the Opera around the world: the flagship London production (approaching 28 Years and counting), New York (27 Years and counting), Sapporo (Japan, 25 Years and counting, in repertory), Budapest (Hungary), Hamburg (Germany), the Asian Pacific Tour (now in Taipei, Taiwan), Moscow (Russia, which had its official opening on October 4, 2014) and Cameron Mackintosh’s spectacular new production now on tour in North America. The next international opening will be in Istanbul (Turkey) in April 2015.

The Phantom of the Opera became the first stage production to reach worldwide grosses of $6 billion, which it did this past summer. Revenues far surpass the world’s highest-grossing film Avatar (at $2.8 billion), as well as such other blockbusters as Titanic, The Lord of the Rings, Jurassic Park and Star Wars.

Worldwide, The Phantom of the Opera has played over 65,000 performances that have been seen by 140 million people in 30 countries and 151 cities in 14 languages. The show has won more than 70 major theater awards.

There have been three previous U.S. National Tours of The Phantom of the Opera that grossed over $1.5 billion in combined box office sales and played 216 engagements in 77 cities for an unprecedented total of 36 years and over 14,500 performances to 31 million people.

Based on the classic novel Le Fantôme de L’Opéra by Gaston Leroux, The Phantom of the Opera tells the story of a masked figure who lurks beneath the catacombs of the Paris Opera House, exercising a reign of terror over all who inhabit it. He falls madly in love with an innocent young soprano, Christine, and devotes himself to creating a new star by nurturing her extraordinary talents and by employing all of the devious methods at his command.

To purchase tickets, visit BroadwaySD.com, call (619) 570-1100, or visit the advance ticket sales booth at 1100 Third Avenue at B Street in downtown San Diego.