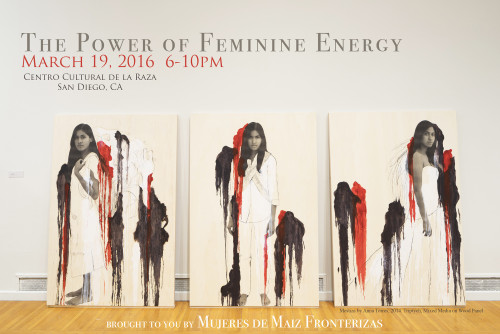 SAN DIEGO–Over 50 women from all over San Diego and beyond will be participating in The Power of Feminine Energy, an all women’s art exhibition celebrating International Women’s Day. The exhibition is taking place at the Centro Cultural de la Raza in Balboa Park and will open to the public March 19.

The exhibition is being organized by the artist collective Mujeres de Maiz Fronterizas based out of the San Diego / Tijuana border region. The collective, which seeks to empower women of color through mentorship, art, culture, activism and leadership opportunities is excited to be creating a safe-space for women to celebrate themselves and each other, and stated the following about the upcoming show: “In the “Power of Feminine Energy” Mujeres de Maíz Fronterizas aims to highlight work by women from all walks of life and all levels of training.  We open the space to both emerging and established artists to give self-identified women and girls the opportunity to tell their stories through art. The theme asks women to challenge misrepresentations of femininity as “weak” and to convey instead how the power of feminine energy challenges patriarchy, oppression and other forms of gender violence. Because women’s stories are often excluded from mainstream platforms, and are especially underrepresented in the art world, we hope that this exhibit contributes towards creating more opportunities for women’s voices to be heard.”

The Power of Feminine Energy is being curated by Leticia Gomez Franco, former curator of the International Women’s Day Juried Exhibitions at Casa Familiar’s The Front from 2008 to 2014. Gomez Franco exclaimed that the exhibition had received over 120 online submissions, a number that surprised her, given the fact that there are now various Women’s Day exhibitions going on in San Diego. She added, that the response proves, that these shows and these spaces are still very much needed in our communities. All-women exhibitions provide a safe-space for women, particularly emerging artist to take the leap and produce work that is personal. “I have seen so many careers blossom throughout the years, for women who’s first show was an all-women’s exhibition. There is something particularly empowering about being in community, about finding that validation in a space that is made specifically to encourage your voice, to let you know, you are enough, and there is power in your work.”

The Power of Feminine Energy will feature over 100 works in various mediums and will open March 19 at the Centro Cultural de la Raza- located at 2004 Park Boulevard in San Diego. The opening reception will run from 6-10pm. While the art exhibition is definitely the highlight, the night also includes a “noche de cultura” featuring live music by DJ Miki Vale, as well as a very special performance by Bomba Liberte, and other local performances. The exhibition will be up through April 3.

Admission to the exhibition is free and everyone is invited and encouraged to attend, although parents who are sensitive to nudity should keep in mind the nature of the exhibition.