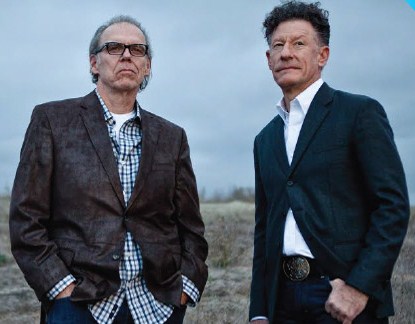 ESCONDIDO–The California Center for the Arts, Escondido will present “An Acoustic Evening with Lyle Lovett and John Hiatt” on November 8 in the Concert Hall.

Lyle Lovett and John Hiatt, two veteran singer-songwriters, team up for an intimate solo acoustic performance for one of the fall’s most anticipated tours. Interviews and hi-res photos are available upon request.

A singer, composer and actor, Lyle Lovett has broadened the definition of American music in a career that spans 14 albums. Coupled with his gift for storytelling, the Texas-based musician fuses elements of Americana, swing, jazz, folk, gospel and blues in a convention-defying manner that breaks down barriers. Lovett’s live performances show not only the breadth of this Texas legend’s deep talents, but also the diversity of his influences, making him a fascinating musician in popular music.

Since his self-titled debut in 1986, Lovett has evolved into one of music’s iconic performers. His oeuvre, rich and eclectic, is one of the most beloved of any living artist working today. It’s no surprise that the Americana Music Association awarded him its inaugural “Trailblazer Award.”

John Hiatt is a talented singer and guitarist best known for his prolific songwriting. His songs have been covered by musicians from Bonnie Raitt and the Neville Brothers to Iggy Pop and Three Dog Night. With 11 GRAMMY Award nominations and 24 albums to his name, he was inducted into theNashville Songwriters Hall of Fame and won the Americana Music Association’s “Lifetime Achievement Award” in 2008.

Hiatt’s latest studio album, Terms of My Surrender (New West Records), marks the 22nd recording of the musician’s storied career. Always a keen observer of life’s flings and foibles alike, usually mixed well together, Hiatt’s insights and skills at sharing them have only sharpened over the years, which is immediately evident upon listening to Terms of My Surrender. With his longtime guitarist Doug Lancio taking the producer reins, Hiatt brings the songs’ character (and characters) into intimate focus. There’s a close-up, patina-festooned bluesy quality tying the tales together. Hiatt’s touring band is featured on the recording: Lancio on guitars, banjo and mandolin, Nathan Gehri on bass, Kenneth Blevins on drums, and John Coleman on keyboards.

Regarding the tour with Lyle Lovett, Hiatt’s says it’s, “our little Smothers Brothers comedy show.” Tickets are selling fast to this “just announced” duo show, don’t miss the chance to see these incredible performers on a single stage with just their voices and guitars.

Stone Brewing Co. and Harmony Grove Village are proud presenting sponsors of “An Acoustic Evening with Lyle Lovett and John Hiatt” at the California Center for the Arts, Escondido.