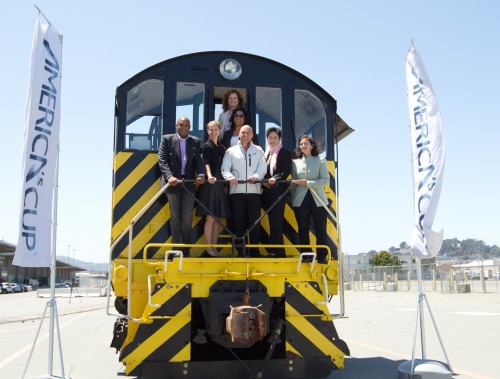 SAN FRANCISCO–The America’s Cup Express, a train stretching 1.5 miles long, rolled into San Francisco today. The 121 railroad cars are carrying the material required to move the America’s Cup World Series and the teams into the host city of the Cup ahead of racing in August and October.

The cargo includes the race boats – the powerful AC45 wing-sailed catamarans that have been thrilling crowds and challenging the best sailors in the world as the Series has moved around the world over the past year. Now, the racing is coming to San Francisco for the first time.

“This train represents more than just another stop on the AC World Series for us,” said Stephen Barclay, the CEO of the 34th America’s Cup. “In less than one month, we’ll be racing for the very first time on San Francisco Bay, with our public AC Village set up on Marina Green. The arrival of the train today is the first step in our move ‘home’ to San Francisco.”

The train has come across the continent following the final day of racing of the 2011-12 AC World Series in Newport, Rhode Island on July 1. Next month, the second season of competition begins in San Francisco from August 21-26.

The America’s Cup Express arrived at Pier 80, where it will be unloaded over the coming days, with the cargo being delivered to various local destinations over the next three weeks. Set up of the AC Village at Marina Green is scheduled to begin in mid-August. Oracle Team USA, the San Francisco based defender of the America’s Cup, is already sailing on the Bay, while other teams are expected to begin training here as early as the first week of August.

“Congratulations to the America’s Cup Event Authority and Race Management on this exciting moment for San Francisco and the America’s Cup teams,” said San Francisco Mayor Edwin M. Lee. “The arrival of the boats and other equipment is just the beginning of more than a year of world-class sailing on our Bay, attracting millions of visitors and generating thousands of jobs.”