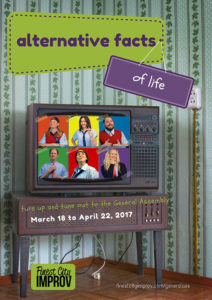 SAN DIEGO–For a limited time engagement, Finest City Improv will explore the current political and social landscape with much needed laughter… and perhaps a few tears.

Opening March 18 and running for 6 consecutive Saturdays, this irreverent sketch comedy romps on both sides of the political line while taking the audience back to the groovy 70’s when seat belts were optional and smoking at a parent/teacher conference wasn’t frowned upon. Red Rover, Red Rover, send Nixon right over?

With comedic sketches, audience interaction, and songs satirizing politically charged family picnics, how dodgeball taught us to be “highly-functioning adults”, and even a tango about the American health care system called “Pre-existing Condition Tango”, the cast delivers a thought provoking and laughter filled 80 minute show.

The show runs on Saturdays at 9 p.m. from March 18 through April 22. Tickets are $15 and available at http://www.finestcityimprov.com/theater/generalass/