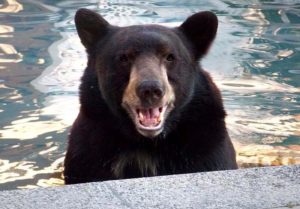 ALPINE–Meatball, the lovable bear at Lions Tigers and Bears, an animal sanctuary in Alpine, celebrates his birthday Thursday.

Bobbi Brink, founder and director of Lions Tigers and Bears, is inviting the community to become a ‘member for a day’ and visit the sanctuary on Thursday to celebrate the bear’s birthday.

Each animal at the sanctuary is a rescue, so the exact date of birth isn’t always known. Instead, volunteers and staff celebrate birthdays on the day the animal first arrived at the sanctuary.

“The day they arrive at LTB is the start of a brand new life. Most of these animals came from deplorable conditions, where they never received proper care,” Brink said. “Our goal is to provide them with the care and attention they require and rightly deserve.”

In Meatball’s case, this 11-year-old California black bear was rescued by the sanctuary on August 29, 2012, (celebrating on the 25th this year) after California Fish and Wildlife officials had to remove him from the foothills of the San Gabriel Valley for becoming a ‘nuisance bear.’ The curious bear was sighted numerous times throughout the spring of 2012 wandering around Glendale, going for a dip in neighborhood swimming pools and even raiding the garage refrigerator of a local resident to score some frozen Costco meatballs (hence the name). This behavior is what officials call habituation – when wild animals become unafraid of humans.

With increased deforestation due to urban sprawl, many wild animals are losing habitat, bringing them closer and closer to human settlements. This is when the three strike rule comes into play; the first two times they are sighted too close they are relocated, the third time they are removed from the wild. Habituated bears often never get a second chance at life and are frequently euthanized after capture. Fortunately for Meatball, the sanctuary was able to step in to provide him with a forever home. This will be his 4th year at the sanctuary, all made possible by the support of generous donors.

Lions Tigers and Bears have made it their mission to not only rescue unwanted exotic animals, but also provide a platform for educating the public. Humans can play a huge role in helping to keep wild bears and other wildlife wild by taking precautionary measures to ensure they stay out of neighborhoods and in the woods.

“Food is what attracts them – they follow their noses. Bears have an incredible sense of smell. They can smell as far away as 20 miles upwind.” says Brink.

It costs a minimum of $10,000 per year to provide basic care to just one bear; the sanctuary is home to ten (6 black bears, 2 grizzlies and 2 Himalayan black bears). The demand to provide these animals, who live up to 30 years in captivity, and eat upwards of 20 pounds of raw fish, nuts and produce each day, has never been greater.

The non-profit sanctuary is asking for the public’s support.

“Across the United States, there are countless bears being kept in private hands that have nowhere left to go. We are trying like mad to secure homes for these bears, but there are little options left. All of the sanctuaries are full. That is why it is so important to try our best to keep these animals wild and free,” says Brink.

In the meantime, Meatball may have lost his freedom to roam the wild, but he is thriving here at the sanctuary where he will live a long, happy life. Visit Meatball and the rest of the 60 plus rescued animals of Lions, Tigers and Bears, and help support these hungry mouths to feed.