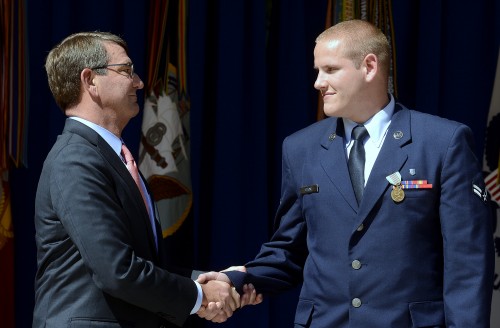 Secretary of Defense Ash Carter shakes hands with Airman 1st Class Spencer Stone after presenting him the Airman’s Medal at the Heroes of the Rails ceremony at the Pentagon in Washington, D.C., Sept. 17, 2015. Stone was awarded the Airman’s Medal and the Purple Heart for bravery and valor for his heroic actions on the train bound for Paris. (U.S. Air Force photo/Scott Ash)

SACRAMENTO–An Air Force service member who helped thwart a gunman’s attack on a French train in August, was involved in a stabbing incident in Sacramento.

Airman 1st Class Spencer Stone was out with a group of friends when a physical altercation led to him being stabbed multiple times in his upper body. Immediately after the assault the assailants fled the scene. Detectives were called to the scene to conduct an investigation, according to Sacramento police department.

Stone was transported to a local hospital. He is currently being treated for non-life threatening injuries and is in stable condition.

On Thursday at 12:46 a.m., police officers received a call from a passerby that a subject had been stabbed in the area of 21st Street and K Street.

Detectives firmly believe that this is not a terrorism related event and that it is not related to the incident that occurred in France.  The assault does not appear to be a random act and is believed to be a nightlife related incident.