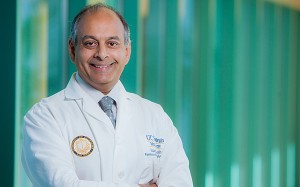 LA JOLLA–Many women struggling to become pregnant may suffer from some degree of tubal blockage. Traditionally, an x-ray hysterosalpingogram (HSG) that uses dye is the most common procedure to determine whether a blockage exists, but it can cause extreme discomfort to the patient.

UC San Diego Health System’s doctors are the first fertility specialists in the county to use a new ultrasound technique to assess fallopian tubes by employing a mixture of saline and air bubbles that is less painful, avoids x-ray exposure and is more convenient to patients during an already vulnerable time.

Using the FemVue Sono HSG, the physician delivers the mixture of saline and air bubbles into the uterus through a small catheter, which then flows into the fallopian tubes. Under ultrasound, the air bubbles are highly visible as they travel through the tubes, allowing the physician to determine if a blockage exists.

“The traditional x-ray approach involves higher pressure and usually causes significant cramping as the dye is administered. The anticipated pain prevents some women from even attempting the test. Others cannot do the test because they are allergic to the dye. Assessing the tubes for a blockage is a key component of the diagnostic workup in fertile couples, and not doing so because of pain or allergy is a real concern,” said Sanjay Agarwal, MD, director of Fertility Services in the Department of Reproductive Medicine at UC San Diego Health System. “The new approach is not only much more comfortable for patients, it also uses saline, so the issue of an allergy does not arise. We are also able to assess the cavity of the uterus at the same time – all without x-rays.”

Kristina, a mother who has been trying to conceive a second child for almost a year, agreed: “I was willing to do whatever it took to address the fertility issues we were facing, but after everything we had been through emotionally, it was a relief to undergo a procedure that wasn’t physically painful.”

The ultrasound is performed in the clinic, and at present, ideal candidates include those with a prior pregnancy and those at low risk for tubal disease.

“Like the traditional x-ray HSG, the new test should be performed after the period has ended but before ovulation. The fact that the patient can schedule this ultrasound-based test in the clinic and not in radiology prevents a delay in care and allows the patient’s physician to be more involved in the process,” said Agarwal, also director of the UC San Diego Center for Endometriosis Research and Treatment (CERT).

Kristina said she was scheduled for the ultrasound just two days after her initial appointment and received the results from Agarwal in the clinic right after the procedure.

“I’m an impatient person, especially in this situation, so to immediately rule out a blockage in my fallopian tubes was a relief,” said Kristina, who will soon undergo fertility treatment.

Reasons for blocked fallopian tubes often include an infection, endometriosis and prior surgeries. Agarwal says there is no cookie cutter treatment plan.

“Each case is unique, and if I find a blockage in the fallopian tubes, I work with my patient to formulate an appropriate treatment plan – one that is medically sound and is also acceptable to the patient,” said Agarwal, who performs one to three of the new ultrasound tests weekly.

Some of those treatment plans for women with tubal blockage may involve taking fertility medicines, having the diseased tube removed surgically or undergoing in-vitro fertilization.

“The ultrasound was a significant part of the puzzle, and now we are trying to fill in the missing pieces,” said Kristina. “I am hopeful and not giving up on my dream to have another baby.”