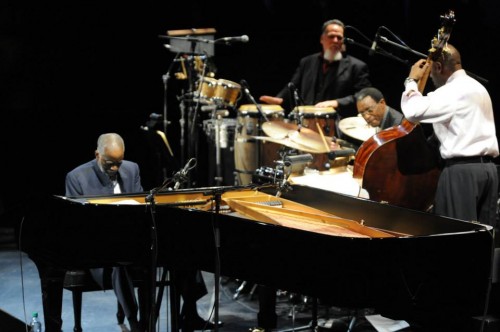 NEW YORK, NY – World renowned trumpeter and composer, musical director of the Jazz At Lincoln Center Orchestra, and the managing and artistic director of Jazz At Lincoln Center (JALC), Wynton Marsalis, kicked off the 2013-14 season by introducing one of 20th and 21st century’s most influential modern jazz pianist still living and actively performing – the prolific Ahmad Jamal. The awesome 83 year-old Ahmad Jamal walked on the stage of the Rose Theater to thunderous applause – seated himself at the piano and proceeded to entertain the sold-out and standing room only audience with creatively swinging, attacking, and improvising melodies as he has done thousands of times throughout his 60 illustrious years on the jazz scene.

The Ahmad Jamal Quartet was composed of the ingenious percussionist Manolo Badrena, the vital bottom pulse of Reginald Veal on double bass, and master drummer Herlin Riley. Jamal, already in other international halls of fame, in 2011 became the most recent addition to the Downbeat Jazz Hall of Fame as well as having been designated a recipient of the National Endowment of the Arts Jazz Masters Fellowship.

Ahmad was in splendid compositional and improvisational form, lengthening the performance time of most songs for more extensive explorations. The result is an astounding 2 ½ hours concert combined with the JALC Orchestra in the second half.

The master virtuoso of the modern jazz piano performed selections from his latest CD title Saturday Morning in addition to selections from his 2012 CD Blue Moon. All selections exemplified the characteristics that have made him a jazz favorite for decades: beguiling vamps, smoking pedal-points, lush interludes, sudden tempo changes, extensive ballad expositions, and hard-swinging solos in uncompromising virtuosity. In addition, the bass and percussion player ‘cranked it up’ a notch to the boiling point on many songs.

It is often noted that Jamal was Miles Davis’ favorite piano player. That would be about as high a compliment any artist could get in jazz, given Davis’ association with most of the great keyboard artists of the 20th century’s later half; in fact, Davis at one point instructed his pianist at the time, Red Garland, to try to sound a lot more like Jamal. More telling as demonstrated in his playing—Jamal isn’t so much an original stylist as an incarnation of all the important elements of styles. His sound is not always instantly identifiable, but that may be because it is the sound of modern jazz piano in its purest form.

Take for example the quartet performing the Latin flavored Silver selection from the Saturday Morning CD, which displayed arrangements of endlessly looping ‘pedal-points’ (which Jamal originated with his mega-hit Poinciana and which inspired the Miles Davis and John Coltrane ‘modal’ frameworks) based on a five-note figuration by bassist Veal, with Badrena and Riley cutting loose on percussion with rim shots, rolling snare figures, crashing cymbals, cowbell accents, and a timbale ‘clave’.

It should be noted that Jamal wrote the Silver piece as a tribute to fellow artist, dynamic composer and pianist, Horace Silver, who composed numerous jazz standards over the years such as Song For My Father and Senor Blues. 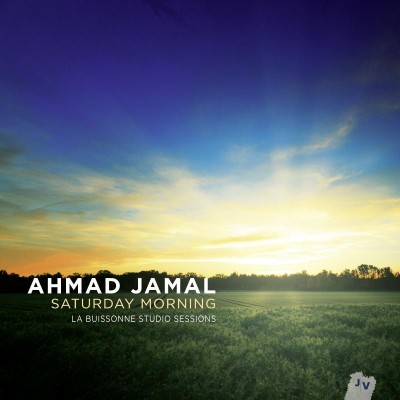 Pittsburgh native Jamal, whether working with a trio, performing solo, or in one of his concerts, he never fails to radiate an electric energy, sharp and immediate. From the opening moments into playing his Saturday Morning selection you can immediately feel that mix of urgency and fluency. You can hear the phrases push impatiently through quick, splashy arpeggios into steely, dissonant chords. There is always a sense of shoving against the beat, even in his more spare passages. After a few spacious moments, a lightning run, a string-rattling surge of two-handed chords, an unlikely boogie-woogie crawl, or a statement of the theme exploding unexpectedly in the bass, kept the audience as well as fellow musicians, in a state of high alert.

Wynton Marsalis and the JALC Orchestra joined The Ahmad Jamal Quartet in the second set to play one of Jamal’s original compositions called New Rhumba. The rhythm section established a Latin groove, contrasting a syncopated bass line with an ostinato pattern by Jamal on piano. Herlin Riley’s drums played a disorienting accent on the fourth beat of the measure. There were series of sparkling juxtapositions of fiery lines over an extended trill, adventurous chordal sweeps up from the brass section into a brawny midrange climax accented with booming octaves.

The evidence was on full display in this majestic concert hall – Ahmad Jamal has not allowed age to slow him down; in fact, he showed a willingness to stretch out even more than he is accustomed to, and demonstrated his enduring ability to temper his musical indulgences with a supreme regard for his material. In this respect Jamal does homage to the spirit of his boyhood musical hero — the 19th-century Hungarian composer, virtuoso pianist, conductor, teacher and Franciscan tertiary, Franz Liszt: And by doing so Ahmad Jamal claims an analogous place for himself as an artist driven by pride and humility, a mastery of technique, a fidelity to tradition and a fascination with learning from what lies beyond its borders.