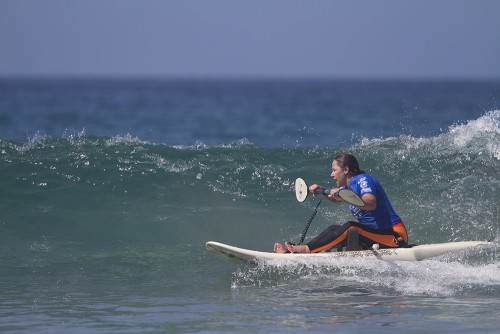 About 69 surfers from 18 countries took to the water, marking the largest international Adaptive Surfing competition of its kind to date.
The opening day of competition took place in clean, glassy conditions, as athletes competed for a chance to surf in the Finals on Sunday. Athletes from all four divisions, Stand, Upright, Prone and Assist, made the most of the 2-3 foot waves at La Jolla Shores, executing impressive carves and maneuvers.
The stand out surfer of the day was South Africa’s Antony Smyth, scoring the highest two wave heat total of 16.77. Smyth, who has paralysis in his right arm, will go on to represent his country in the Finals on Sunday for a chance to win Gold.
Lucas Retamales, a blind surfer from Chile, put on an inspiring performance drawing a huge reaction from the crowd. He was able to sense incoming waves and get long rides from deep in the ocean to the beach. Having lost his surfboard in the recent Chilean tsunami, Retamales kept his composure and put on a spectacular effort on a borrowed board.
On the women’s side, Danielle Burt, representative of Team USA, spoke about the union of the global Adaptive Surfing community after her Round 1 heat.

“In my next heat I get to surf with the guy who inspired me to get into Surfing in the first place, Alcino “Pirata” Neto. He was the first above knee amputee I’ve ever seen standing up on a surfboard.

“It was also great to meet Eric Welton. He started surfing after seeing pictures of me, which is what the ISA World Adaptive Surfing Championship is all about, to inspire other people.”

“The first round of competition was absolutely amazing! Seeing all of the athletes on the beach cheering and rooting for their country and the other countries was so inspirational,” said ISA President Fernando Aguerre on the first day of the competition.

Every one of these athletes has a unique story that has led them to this ISA World Championship. It is a beautiful thing to see them in one place, forming new friendships and paving the road for the future growth and development of Adaptive Surfing around the world.”

The competition will resume on Sunday with the finals and closing ceremony.