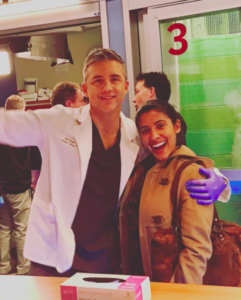 “Chicago Med” is an emotional thrill ride through the day-to-day chaos of the city’s most explosive hospital and the courageous team of doctors who hold it together. They tackle unique new cases inspired by topical events and forging fiery relationships in the pulse-pounding pandemonium of the emergency room.

Born in Caracas, Venezuela, Morgado is best known for her work opposite Denzel Washington, Mark Wahlberg, John Travolta, and Dwayne Johnson. She has worked with award-winning directors, including James Mangold, Juan Jose Campanella, Baltasar Kormakur, Shawn Levy, and Chuck Russell. She’s received her acting training in some of the most prestigious acting schools in Los Angeles, training at Warner Loughlin Studio, Diana Castle’s The Imagined Life, and The BGB Studio. She has also trained at The Groundlings and in Scott Sedita’s Sitcom Acting Studio.

Morgado’s talent and exotic look has also made her a favorite among directors in primetime TV. She has recurred on “The Red Road,” guest starred in “Colony,” “Jane the Virgin,” “NCIS,” and “NCIS: New Orleans,” and now “Chicago Med.”