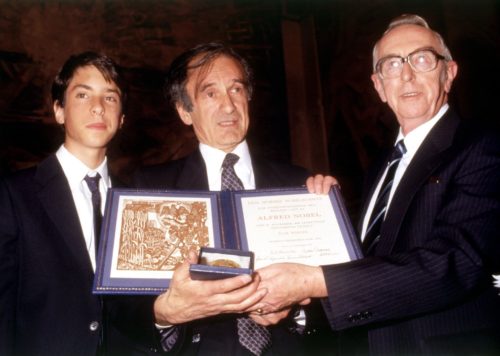 He was an outspoken human rights activist whose words informed and inspired millions around the world, as he advocated for social justice and implored people to remember the Holocaust.

Below are some of his most memorable words of wisdom: “Whoever listens to a witness, becomes a witness,” he said at the Legacy of Holocaust Survivors conference at Yad Vashem’s Valley of the Communities in April 2002.

“We must always take sides. Neutrality helps the oppressor, never the victim. Silence encourages the tormentor, never the tormented. Sometimes we must interfere. When human lives are endangered, when human dignity is in jeopardy, national borders and sensitivities become irrelevant. Wherever men or women are persecuted because of their race, religion, or political views, that place must—at that moment—become the center of the universe,” he said in his Nobel Peace Prize acceptance speech on Dec. 10, 1986. “Action is the only remedy to indifference: the most insidious danger of all,” he said in the same speech.

“For in the end, it is all about memory, its sources and its magnitude, and, of course, its consequences,” he wrote in Night, his internationally acclaimed memoir, published in 1960.

“For the survivor who chooses to testify, it is clear: his duty is to bear witness for the dead and for the living. He has no right to deprive future generations of a past that belongs to our collective memory. To forget would be not only dangerous but offensive; to forget the dead would be akin to killing them a second time,” he also wrote in the memoir. 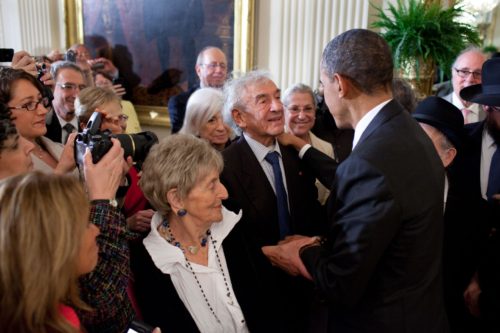 President Barack Obama greets Elie Wiesel during a reception in honor of Jewish American History Month in the East Room of the White House, May 17, 2011. (Official White House Photo by Pete Souza)

“[Albert] Camus said, ‘Where there is no hope, one must invent hope.’ It is only pessimistic if you stop with the first half of the sentence and just say, There is no hope. Like Camus, even when it seems hopeless, I invent reasons to hope,” he said in an interview with TIME in 2006.

I imagine that for many Americans, Elie Wiesel remains a dimly understood historical figure. The generation of young people today are too young to even know of the horrors of World War II and the Holocaust. I also suspect a lot of us know that he was a great Jewish Holocaust survivor who champion human rights without quite knowing that why and, such is our ignorance of the Holocaust history and Jewish culture, we may not fully realize that his movement did indeed liberate the human spirit of those who were enslaved to hate, bigotry, intolerance, racism, homophobia, sexism, and cultural indifferences.

And Elie Wiesel accomplished all of this without speaking words of hatred, spewing insults, promoting racial and religious divisions. He accomplished his agenda by promoting non-violent methods similar to the likes of Mahatma Gandhi and Dr. Martin Luther King, Jr.

What is important about Elie Wiesel’s life’s work is not that it serves as a history lesson, although it does, but that, at a time when the threat of global economic unrest, human rights abuses, religious persecutions and tribal warfare runs rampant,  and the constant threat of crooked politicians and false religious prophets run amok, Elie Wiesel’s life’s work reminds us that we  are all human, and thus capable of the most extraordinary and wonderful achievements, simply through the use of our imagination, our will, and our sense of right.