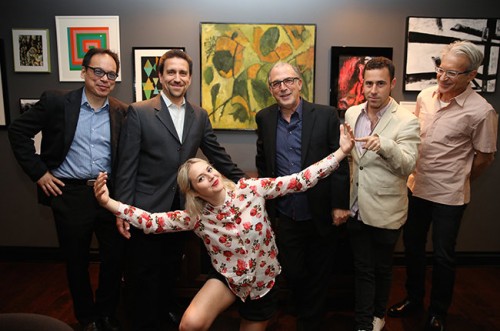 Concord Music Group has announced the signing of acclaimed songwriter, multi-instrumentalist and vocalist Kate Davis. Davis is currently working on material for what will be her first recording. The as-yet-untitled album is scheduled for release in spring of 2016.

Lauded by MTV Buzzworthy as one of the “15 Fresh Females Who Will Rule Pop,” Davis grew up with an instrument in her arms and a head full of inventive lyrics. Her lifelong training makes for smart, warm pop that’s as musically nuanced as it is addictive.

“Kate has quickly developed into an outstanding singer-songwriter, as well as a gifted multi-instrumentalist,” said Mark Wexler, Chief Operating Officer, Concord Label Group. “She’s a stunning musical talent with a wholly original voice whose potential is unlimited. We are all very excited and look forward to working closely with her in the continued evolution of her career.”

Concord Music Group President and Chief Executive Officer Glen Barros agrees: “Kate has it all – she’s a great songwriter, a virtuosic and versatile instrumentalist, and an amazing vocalist. We can’t wait to see how she evolves and are grateful to play a role in launching what promises to be a fantastic recording career.”

Davis has been turning heads in New York’s music scene. Whether she’s crooning rootsy ballads or plucking bright riffs from her bass, the gutsy songstress from Portland, Oregon, puts a fresh spin on the standards and brings a canonical sensibility to her own lush tracks.

“The most important element in music making is support from outside forces. Energy, kindness, and of course, the financial backing to make it all come to life,” Kate states. “I feel so lucky that I have found a new family that will give me all that, and more! I can’t wait to make records, and I can’t wait to begin this new chapter of my life as a Concord artist. I gawk at the names on the roster often…Here’s hoping for future records that contribute to their highly regarded reputation.”

Davis has performed at such illustrious venues as The Kennedy Center, The Bowery Ballroom, Lincoln Center, and Carnegie Hall—as well as pretty much every noteworthy club in NYC. She has shared the stage with such diverse artists as Alison Krauss, Wynton Marsalis, Josh Groban, Ben Folds, Michael Feinstein and Renee Fleming. Her accolades include a Robert Allen Award from the ASCAP Foundation, and her arts advocacy work includes a presentation at TEDx Portland and participation in the 2010 National Arts Policy Roundtable. Kate is a Silver Winner of the National YoungArts Foundation.