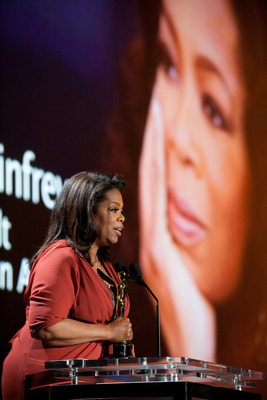 HOLLYWOOD, CA–Oprah Winfrey received an honorary Oscar for her charitable work in what she called an unimaginable moment for an African American woman who grew up poor in Mississippi and rose to be an international celebrity and philanthropist.

The Academy of Motion Picture Arts and Sciences annually bestows its Governors Awards on people who have made an impact in the industry. This year, the honorary Oscars went to Winfrey, actor James Earl Jones and makeup artist Dick Smith at a black-tie affair, which was held at the Grand Ballroom at Hollywood & Highland Centeron November 12, and brought out stars such as John Travolta, Sidney Poitier and Alec Baldwin.

Talk show host and film actress Winfrey, who was nominated for a supporting-actress Academy Award in 1985’s The Color Purple,” was given a Jean Hersholt Humanitarian Award by a young woman who was sent through high school on a financial grant she earned from Winfrey’s foundation.

Winfrey, from her seat in the audience also wiped away a tear, as a young Barnard college student, Ayanna Hall, who had gone to school on a scholarship from the Oprah Winfrey Foundation, testified about the impact that Winfrey has had on thousands of lives. Speaking from her heart rather than prepared remarks, Winfrey explained the guiding principle between her commitments to philanthropy, saying, and “Your life matters. You matter. What you do matters.”

Winfrey was in tears when accepting her honorary Oscar and described the moment as “unimaginable” given her humble roots growing up in Mississippi.

“All of us can make a difference through the life we lead,” Winfrey said. “We’re all here to help each other.”

She talked of her career as a TV chat show host and her movie work, and said it was The Color Purple that paved the way to stardom, which ultimately led to philanthropy.

That movie “door opened to me through the magic and majesty of film,” she said. 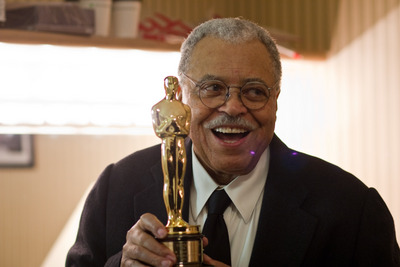 Honorary Award recipient James Earl Jones at the Wyndhams Theatre in London as part of the 2011 Governors Awards Lou Boileau/©A.M.P.A.S.

that ranges from his Academy Award-nominated performance as a boxer in The Great White Hope to voicing the role of the villainous Darth Vader in the Star Wars movies.

Alec Baldwin kicked off the testimonials to Jones by reminding the crowd of the range of roles Jones has played, confessing “I wanted James Earl Jones’s career – that’s what every actor wants” and tossing in a credible impersonation of Jones’ deep bass voice. Glenn Close, admitting that watching Jones perform on stage in Fences reduced her to “a sobbing, stammering mess,” said, “I just want to say thank you for what he has given me and all those who have been touched by his supreme artistry.”

Jones was not on hand, because he is working in London, but he spoke to the Los Angeles audience in a speech that was taped earlier on Saturday, November 12 before the evening ceremony. 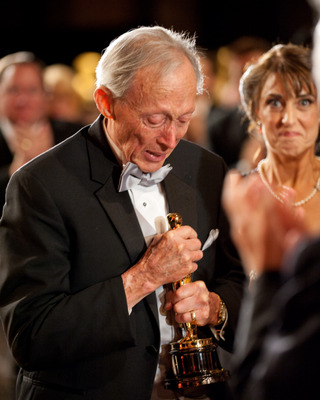 Honorary Award recipient Dick Smith during the 2011 Governors Awards in the Grand Ballroom at Hollywood & Highland in Hollywood. Matt Petit/©A.M.P.A.S.

Finally, the “Godfather of makeup” Dick Smith was given an honorary Oscar for his behind-the-scenes work using makeup and prosthetics to make actors look old, young, sick, dying and dead in films ranging from The Exorcist to The Godfather.

Linda Blair, who was 13 when she starred in The Exorcist, introduced the portion of the program devoted to Smith’s work. For that movie, Smith transformed her into a head-spinning demon. “For me, it was not as much fun as I think it was for Dick,” she recalled fondly. “It was not a little girl’s dream.” However, she explained how Smith worked hard to perfect the make-up demands of director William Friedkin, who insisted that Blair be recognizable beneath the effects.

Smith gave a tearful and heartfelt acceptance speech in which he said he has loved every minute of his work in the movie business. “This kind of recognition puts the crowning cap on all that,” Smith said.

The Oscars, or Academy Awards, for the films of 2011 will be awarded in a televised ceremony in Los Angeles on February 26, 2012.