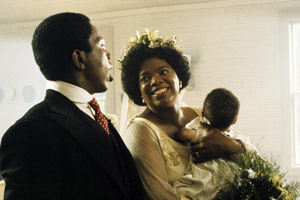 Oprah Winfrey in "The Color Purple."

BEVERLY HILLS–The Academy of Motion Picture Arts and Sciences will present its inaugural Governors Awards Film Series, featuring screenings of “The Exorcist,” “The Color Purple,” and “The Great White Hope,” from Wednesday, November 9, to Friday, November 11, at 7:30 p.m. at the Academy’s Samuel Goldwyn Theater.

The series schedule is as follows:

This cultural touchstone showcases Dick Smith’s groundbreaking makeup designs, including 14-year-old Linda Blair’s satanic transformation. Introduced by Academy governor Leonard Engelman, the evening will feature Smith in person as well as remarks from special effects makeup artist Rick Baker and cinematographer Owen Roizman. While “The Exorcist” received 10 Oscar® nominations, including Best Picture, Smith himself was not formally recognized for his remarkable work, as the Academy Awards® Makeup category would not be established until 1981.

One of today’s most influential figures in entertainment and philanthropy, Oprah Winfrey received a Supporting Actress nomination for her performance as Sofia in this 11-time Oscar-nominated film. Academy President Tom Sherak will introduce the evening, which will feature remarks from fellow nominee Margaret Avery, who played Shug Avery in the film, and a video message from 2009 nominee Gabourey Sidibe. Sidibe’s breakthrough performance came as the title character in “Precious: Based on the Novel ‘Push’ by Sapphire,” which Winfrey executive produced.

James Earl Jones won a Tony® Award as boxer Jack Johnson in The Great White Hope on Broadway, and two years later, earned an Oscar nomination for his performance in the big screen adaptation. Introduced by Academy President Tom Sherak, the evening will feature remarks from Phillip Noyce, who directed Jones in “Patriot Games” and “Clear and Present Danger,” and actor Courtney B. Vance, a co-star in “The Hunt for Red October.”

The week will culminate in the Academy’s 3rd Annual Governors Awards presentation on Saturday, November 12, at which Jones will be honored “for his legacy of consistent excellence and uncommon versatility,” Smith “for his unparalleled mastery of texture, shade, form and illusion,” and Winfrey “for efforts that promote hope around the world and goodwill for the film industry.” All three will receive Oscar statuettes.

Tickets for each screening in the Governors Awards Film Series are $5 for the general public and $3 for Academy members and students with a valid ID. Tickets may be purchased starting Tuesday, November 1, online at www.oscars.org and by mail.

The Samuel Goldwyn Theater is located at 8949 Wilshire Boulevard in Beverly Hills. Doors open at 6:30 p.m. All seating is unreserved.