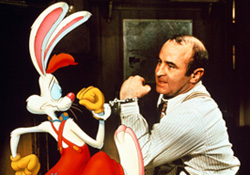 BEVERLY HILLS–The Academy of Motion Picture Arts and Sciences will present a new digital restoration of “Who Framed Roger Rabbit” in celebration of the film’s 25th anniversary on  April 4 at 7:30 p.m. at the Samuel Goldwyn Theater in Beverly Hills.

The evening will feature a post-screening onstage discussion with director Robert Zemeckis and members of the cast and crew, including actress Joanna Cassidy, voice actor Charles Fleischer, supervising animator Andreas Deja, screenwriter Peter S. Seaman and associate producers Don Hahn and Steve Starkey.  The panel will be moderated by director Rich Moore, who received an Oscar® nomination for Animated Feature Film for “Wreck-It Ralph” this past year.

A masterful blend of live-action filmmaking and classic animation, “Who Framed Roger Rabbit” boldly announced the rebirth of the Disney animation studio.  The film endures as an inventive tribute to animation’s golden age that also set a new standard for what the medium could achieve.

“‘Roger Rabbit’ brought together the greatest animators, the most skilled technicians, and the finest talent of the day,” said Zemeckis.  “It’s good to have this chance to show our work to both those who remember the film as well as to a new audience.”

Tickets for “Who Framed Roger Rabbit” are $5 for the general public and $3 for Academy members and students with a valid ID, and may be purchased online at oscars.org, in person at the Academy box office, or by mail.  The Samuel Goldwyn Theater is located at 8949 Wilshire Boulevard in Beverly Hills.  Doors open at 6:30 p.m.  All seating is unreserved.  For more information, call (310) 247-3600, or visit oscars.org.