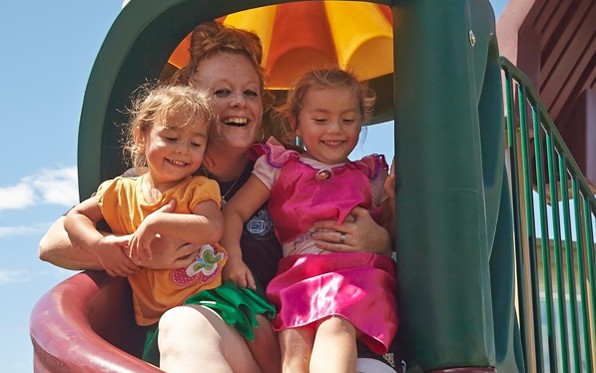 Michele Helkenn plays with her daughters, 2-year-old Marissa and 3-year-old Mariana, on a slide at the apartment complex where they now live in Vista. Photo courtesy of Lionshead Studios.

She recalls the little plastic bags the crystalline drug would always come in, and the glass pipe she would use to smoke it.

Most of all, Helkenn, 29, remembers the day, three years ago, that she left the drug behind: July 27, 2010. She’d spent much of her life up to that point in the throes of addiction to not just meth, but other drugs, and alcohol as well.

“I did anything except heroin,” said Helkenn, sitting in the kitchen of the two-bedroom apartment in Vista she now shares with her two young daughters, 3-year-old Mariana and 2-year-old Marissa. “Cocaine, crack, ecstasy, marijuana–I had access to it all.”

The single mom has come a long way since those days. She got clean, but still, it’s taken a few years to rebuild her life. She went from having nowhere to live to moving into a renovated affordable housing complex in Vista in June, thanks to her recovery efforts and a lot of help from a lot of people, including the County of San Diego.

The $12.8 million apartment development, which officially opened in late August, was funded in part through a $780,000 loan from the city of Carlsbad using funding from the San Diego County HOME Investment Partnerships Consortium, which is administered by the County Department of Housing and Community Development (HCD).

The HOME consortium funding, which comes from the federal Department of Housing and Urban Development and is administered by County HCD as the lead entity of the HOME Consortium, has taken on a heightened importance in light of the dissolution of the state’s redevelopment agencies, said Chris Megison, President and CEO of the nonprofit Solutions for Change, which owns and manages the complex, called Vista Terrace.

The affordable housing complex is part of an effort to solve the devastating problem of family homelessness in San Diego County. The County, as well as five North County cities—Carlsbad, Escondido, Oceanside, Vista and San Marcos—have come together on Solutions for Change’s initiative called the “Imperative to Solve Family Homelessness in North County.” The first phase, “Finding Our Way Home,” aims to place at least 200 families and 400 children in affordable housing.

The County’s leadership and investment has been critical to this and other projects by the nonprofit, said Megison. Staff from HCD has taken an active role, visiting the apartment complex while it was undergoing renovation and asking questions. The County provides rental assistance to 35 families living at Vista Terrace through project-based vouchers, which are a part of the Housing Choice Voucher Program (commonly known as Section 8), said Tom D’Lugo, Housing Program Analyst IV at HCD. The vouchers serve as a permanent source of rental assistance for the families, as long as they remain eligible.

The newly redone Vista Terrace complex is one of nearly 20 properties owned and managed by Solutions for Change. The nonprofit takes a non-traditional approach to solving family homelessness, focusing on providing access to permanent solutions such as housing and work, rather than managing the symptoms, as Megison puts it. Participants in the nonprofit’s programs, like Helkenn, work, pay rent and attend workshops and classes on practical, hands-on topics such as parenting or how to create a resume.

Helkenn lived at two of Solutions for Change’s other facilities before moving into the Vista complex in June. She credits the support and training she got for helping her achieve a life she never thought she could have.

The day she and her daughters moved in, Helkenn said she walked into the apartment and dropped to her knees.

“I thanked God for this program that has given me this life,” she said. “Because of Solutions for Change I have the life that I have today.”

By age 21, Helkenn was already having seizures as a side effect of the drugs she was doing. But it would take her five more years, and multiple attempts at rehab, before she got clean.

By age 25, Helkenn was arrested for shoplifting, commercial burglary and theft. She was living in an abandoned home with other drug users.

A short time later, she was caught stealing again. This time, the cops came at her and her boyfriend with guns drawn. They arrested her and showed her a “Wanted” poster with both of their names and photos.

“It was God’s way of telling me, ‘get your life straight,” Helkenn said. Still, she wasn’t ready to stop the drugs.

As she reflected on her story last week, Helkenn became emotional.

“It’s just not a way to live,” Helkenn said. “I pray for anyone living through that right now.” She said she hoped that by telling her story, she may be able to help others in similar situations.

At age 25, Helkenn became pregnant. She continued using drugs, even after her baby was diagnosed with a birth defect.

Her daughter survived, and six months later, she Helkenn was arrested for the last time.

She spent a few weeks in jail. When she got out, the court ordered her to a treatment program at the nonprofit McAlister Institute in Lemon Grove, which is partly funded by the County.

“That was the turning point for everything,” she said. “I knew I would stay clean and get my daughter back.”

From there, in 2010, she said her life has gotten better and better.

She gave birth to a second child and was able to stay clean throughout that pregnancy.

She found her way to the nonprofit Solutions for Change last year and has made huge strides there, she said, working her way from the nonprofit’s bunk beds at its intake center to its apartment complex in Vista.

She said the nonprofit’s system of holding participants accountable and requiring them to earn their way through really worked for her.

“They don’t hand you anything,” she said. “Nothing is free. I worked for it.”

Today, she feels lucky to have a job at a Starbucks, and a place for her and her daughters to live. Both are enrolled in a preschool nearby, which she drives to in a used car her parents sold to her.

She attends Narcotics Anonymous meetings at least twice a week.

Most of all, she said she feels grateful.

“Life, today, is beautiful,” she said.