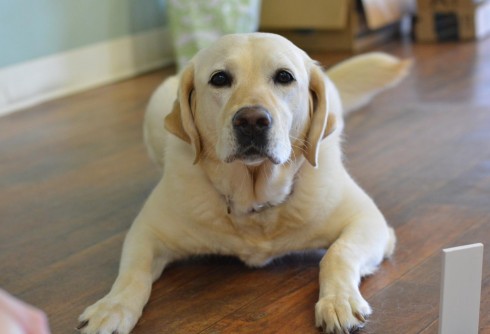 (Newswise)–Given the choice, many dogs prefer praise from their owners over food, suggests a new study published in the journal Social, Cognitive and Affective Neuroscience. The study is one of the first to combine brain-imaging data with behavioral experiments to explore canine reward preferences.

“We are trying to understand the basis of the dog-human bond and whether it’s mainly about food, or about the relationship itself,” says Gregory Berns, a neuroscientist at Emory University and lead author of the research. “Out of the 13 dogs that completed the study, we found that most of them either preferred praise from their owners over food, or they appeared to like both equally. Only two of the dogs were real chowhounds, showing a strong preference for the food.”

Dogs were at the center of the most famous experiments of classical conditioning, conducted by Ivan Pavlov in the early 1900s. Pavlov showed that if dogs are trained to associate a particular stimulus with food, the animals salivate in the mere presence of the stimulus, in anticipation of the food.

“One theory about dogs is that they are primarily Pavlovian machines: They just want food and their owners are simply the means to get it,” Berns says. “Another, more current, view of their behavior is that dogs value human contact in and of itself.”

Berns heads up the Dog Project in Emory’s Department of Psychology, which is researching evolutionary questions surrounding man’s best, and oldest friend. The project was the first to train dogs to voluntarily enter a functional magnetic resonance imaging (fMRI) scanner and remain motionless during scanning, without restraint or sedation. In previous research, the Dog Project identified the ventral caudate region of the canine brain as a reward center. It also showed how that region of a dog’s brain responds more strongly to the scents of familiar humans than to the scents of other humans, or even to those of familiar dogs.

For the current experiment, the researchers began by training the dogs to associate three different objects with different outcomes. A pink toy truck signaled a food reward; a blue toy knight signaled verbal praise from the owner; and a hairbrush signaled no reward, to serve as a control.

The dogs then underwent a behavioral experiment. Each dog was familiarized with a room that contained a simple Y-shaped maze constructed from baby gates: One path of the maze led to a bowl of food and the other path to the dog’s owner. The owners sat with their backs toward their dogs. The dog was then repeatedly released into the room and allowed to choose one of the paths. If they came to the owner, the owner praised them.

“We found that the caudate response of each dog in the first experiment correlated with their choices in the second experiment,” Berns says. “Dogs are individuals and their neurological profiles fit the behavioral choices they make. Most of the dogs alternated between food and owner, but the dogs with the strongest neural response to praise chose to go to their owners 80 to 90 percent of the time. It shows the importance of social reward and praise to dogs. It may be analogous to how we humans feel when someone praises us.”

The experiments lay the groundwork for asking more complicated questions about the canine experience of the world. The Berns’ lab is currently exploring the ability of dogs to process and understand human language.

“Dogs are hypersocial with humans,” Berns says, “and their integration into human ecology makes dogs a unique model for studying cross-species social bonding.”