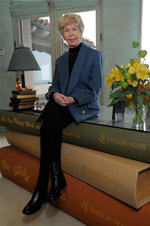 LA JOLLA–The University of California, San Diego received an unexpected and generous gift from longtime campus supporter Audrey Geisel in honor of the university’s 50th Anniversary. The $2 million donation will be used to jumpstart the renovation of University House, the currently uninhabitable private residence for the UC San Diego Chancellor.

Geisel, widow of author Theodor “Dr. Seuss” Geisel who wrote “How the Grinch Stole Christmas” among other books, has had a longstanding relationship with UC San Diego, donating more than 8,000 of her late husband’s original drawings, sketches, books and other memorabilia to the university libraries. In 1995, the university’s library was renamed Geisel Library in honor of Theodor Geisel, following a $20 million gift from Audrey Geisel. Mrs. Geisel, who was recently awarded the prestigious UC San Diego Chancellor’s Medal, has made a lasting impact on nearly every area of the campus – from the UC San Diego Libraries, Scripps Institution of Oceanography and Health Sciences, to student scholarship and fellowship support and the renovations of the Faculty Club.

“In 1960 there was no UC San Diego,” said Mrs. Geisel. “There was just a beautiful bluff … with nothing on it. And I recall that Roger Revelle and several others had their spades and they dug a little earth. And that was the very very beginning; that was UCSD.” She noted, “I’ve watched the campus grow over the past 50 years, and I feel so much a part of this university. I just do.”

UC San Diego Chancellor Marye Anne Fox added, “Ted and Audrey Geisel were two of UC San Diego’s earliest community supporters, reminding us that education should be joyful and imagination can be powerful. Audrey has sustained Ted’s spirit through her generosity, her wise counsel, her commitment to excellence and her personal charisma.”

University House was assessed by engineers in 2004, and it was determined to be uninhabitable due to several factors including the condition and stability of its roof structure in case of an earthquake. In the fall of 2008, the campus developed an advisory group with the community, partnering with Native American representatives, the La Jolla Historical Society, Save our Heritage Organisation and others. It was decided to rehabilitate the house rather than build a new facility.

The advisory group, which has made recommendations on how to improve University House, has been particularly sensitive to the cultural values of the Kumeyaay, whose ancestors once lived on the site. Rehabilitation will allow UC San Diego to enhance, respect and celebrate the cultural and historic significance of the property in such a way that it maintains its integrity and the respect for the Native American community.

The $2 million gift from Audrey Geisel will allow the renovation to move forward so that it can once again serve as both the Chancellor’s private residence and as a public reception forum for members and friends of the university. The project timeline includes receiving project and design approval as well as environmental certification (three separate actions) by the University of California Regents this spring; the project is on schedule to issue the draft EIR (Environmental Impact Report) for public review in January 2011. At the current pace, university officials believe that construction could commence in late summer 2011 with completion anticipated the summer of 2012. The total cost for the University House rehabilitation project has not yet been determined.