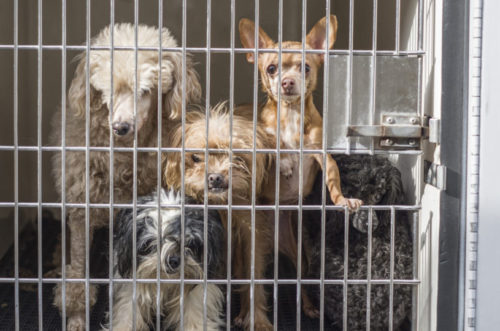 Animal control officers found 53 dogs on the property, including two litters of puppies.

All of the dogs were healthy and being cared for, but County regulations allow only six adult dogs on a property in the unincorporated area unless the property is zoned for more than that and the owner has a permit for a kennel.

“This was a case where the owner let the animal situation get away from her,” said County Animal Services Director Dawn Danielson. “She had dogs that weren’t spayed and neutered. Within a short time, they bred and the population ballooned to more than 50 dogs.”

Animal control officers said the owner was very cooperative and grateful for help. She explained the problem started when several of her dogs had puppies and she couldn’t find homes for them.

On Saturday, 25 more dogs were relinquished. They were all adults and included border collies, border collie blends, toy and miniature poodles, a Chihuahua, a Chihuahua blend, a Shih Tzu, Shih Tzu blends, a shepherd blend and a cocker spaniel.

All of the relinquished animals were taken to the County’s animal care facility in Bonita. They were checked by a veterinarian and some were transferred to rescue groups within a matter of hours. Others were made available for adoption and the San Diego Humane Society took in nine dogs.

The owner also had five goats, two horses and a number of pigs on the property and told Animal Services she wanted to reduce her livestock. They put her in touch with a rescue group who can help take most of the pigs and a horse. She decided to keep six dogs, the number allowed for her property.

Danielson said the situation with the dogs is just one example of the importance of spaying and neutering your pets. County Animal Services offers spay/neuter discount coupons year round.