WASHINGTON, DC – More than a million people gathered in Washington and in cities around the country and the world Saturday, January 21, to mount a spontaneous and boisterous response to the inauguration of President Donald J. Trump. What started as a Facebook post by a Hawaii retiree became an unprecedented international rebuke of a new president that packed cities large and small — from to Los Angeles, London, Paris to Park City, Utah, Miami to Melbourne, Australia, Mexico City to Poland.

San Diego County News was told by the organizers of the Women’s March on Washington, who originally sought a permit for a gathering of 200,000, said Saturday that as many as a half-million people participated. Many in the nation’s capital and other cities said they were inspired to join because of Trump’s troublesome campaign and his denigration of women, minorities and immigrants. In signs and shouts, they mocked what they characterized as Trump’s lewd language and sexist demeanor. The marches provided a balm for those eager to immerse themselves in a like-minded sea of citizens who shared their anxiety and disappointment after Democrat Hillary Clinton’s historic bid for the presidency ended in defeat.

“We just want to make sure that we’re heard,” said Nina Aosuchukwu, 28, a D.C. native at the Washington march with her 6-year-old daughter, Nhioma. “I want her to know that she has a voice. No matter what anyone tells her, especially as a black woman in America.”

The Washington demonstration was augmented by gatherings around the world, with march organizers listing more than over 600 planned events, including, Barcelona, Mexico City, Tel Aviv, Berlin and Yellowknife in Canada’s Northwest Territories, where the temperature was 6 degrees below zero.

According to the Chicago Tribune, in Chicago, the demonstration was overwhelmed by its own size, after 150,000 demonstrators swamped downtown blocks. It forced officials to curtail their planned march, although thousands of protesters still paraded around the Loop. In Boston, police estimated a gathering of 125,000. In Los Angeles, officials temporarily closed some side streets to accommodate the crowds.

The Los Angeles Times reported: “We are doing our best to facilitate because they are squeezing into every street right now,” said Capt. Andrew Neiman of the Los Angeles Police Department. 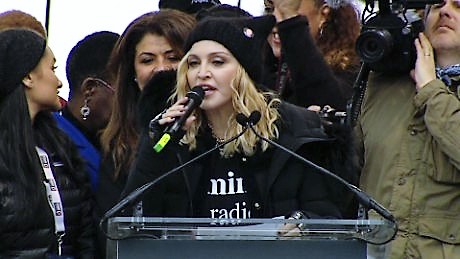 In Juneau, Alaska, one man marveled that the crowd was the biggest he had ever seen on the state Capitol’s steps. In Philadelphia, marchers filled city bridges. In Lexington, Ky., they shut down streets. In New Orleans, participants played brass instruments.

The fear — and anger — at Trump’s rise to the most powerful position in the United States reverberated at renowned protest sites around the globe, from the Trocadero in Paris to Trafalgar Square in London.

The Guardian of London reported that Marina Knight, a 43-year-old executive assistant, and her 9-year-old daughter were two of the tens of thousands marching in London.

“This is her first march,” Knight said, referring to her daughter. “It’s the first time we felt it was vital to march. I feel the rights we take for granted could go backward, and we owe it to our daughters and the next generation to fix this somehow.”

In the United States, the crowds marched in weather ranging from balmy to snowy. But common to every gathering was fiery rhetoric, pink knit hats, and repeated references to the boast that offended so many women: Trump’s infamous taped comments about groping female genitals.

Among the thousands of signs that marchers dumped at the end of the day in front of the Trump International Hotel, just blocks from his new home at 1600 Pennsylvania Ave.: “P—y Power” and “This P—y Bites Back.” Protesters got as close as they could to the presidential mansion, crowding metal barriers less than a block away as police and Secret Service personnel watching closely.

Demonstrators came to Washington, DC from around the country, sometimes sleeping on the couches of people they had never met. As of 4 p.m. Saturday, the Washington, DC Metro had recorded more than 597,000 trips, a weekend ridership record. By comparison, as of 4 p.m. on Inauguration Day, there were 368,000 trips. The city issued about 1,800 bus parking permits for the march, and Amtrak added extra trains in and out of Union Station.

The huge crowd delighted iconic feminist Gloria Steinem, 82, who was among the first speakers. “This is the upside of the downside,” she exulted. “This is an outpouring of democracy like I’ve never seen in my very long life.” 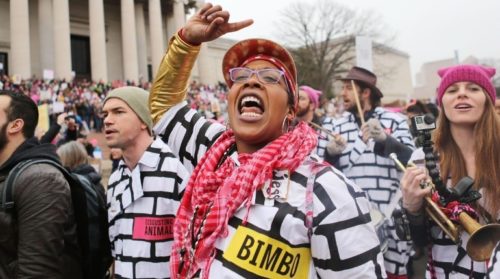 Clinton did not attend the march but tweeted her gratitude: “Thanks for standing, speaking & marching for our values @womensmarch. Important as ever. I truly believe we’re always stronger together.”
Though the marchers were mostly female and white, men and people of color also joined the crowd.

I’m here to support my wife,” said Fletcher. “I don’t care who you are, women impact your life, and there’s no reason why they shouldn’t have the same rights as men.”

Cindy Hu, a 61-year-old Chinese American living in Florida, said she wanted the new president to know that women will be fighting during his presidency to ensure that the country and laws treat them equally. She was with her daughter and marching for her two granddaughters in the hope that no future president feels comfortable making lewd comments about women.

“I don’t want this to happen to them 20 years from now, so I am making my mark now,” said Hu, who wondered, “Why are we the ones that bring people into this world, and we are treated the worst? We should be treated with respect.”

The crowd was buoyant, even joyous. Many held up signs — “I Am Very Upset!” and “Love Trumps Hate” and “Bridges Not Walls” — while others took videos of the moment on their cellphones. Every few minutes, a rolling roar swept over them.

The march turned into a star-studded event, with celebrities such as Madonna, Janelle Monáe, Scarlett Johansson and Ashley Judd making appearances. D.C. Mayor Muriel E. Bowser (D) introduced herself as a proud “chick mayor” and implored the Republican majority in Congress to stop meddling in the District’s local lawmaking.

Activist filmmaker Michael Moore ripped a copy of The Washington Post in half, noting the headline “Trump takes power” and declaring “I don’t think so.” Actress America Ferrera declared that “our new president is waging a war” on the values that define the country with “a credo of hate fear and suspicion of one another.”

“It’s been a heart-rending time to be both a woman and an immigrant,” said Ferrera, whose parents are from Honduras. “Our dignity, our character, our rights have been under attack.”
“But the president is not America,” she said. “We are America.”

As the march grew in prominence, it highlighted long-existing racial and political rifts in the feminist movement. The initial organizers of the march were white women — a group that narrowly voted for Trump in November — although they quickly handed its leadership over to a diverse group of veteran organizers from New York.

President Trump has yet to Tweet or issue any statements regarding this massive worldwide demonstration against his administration.