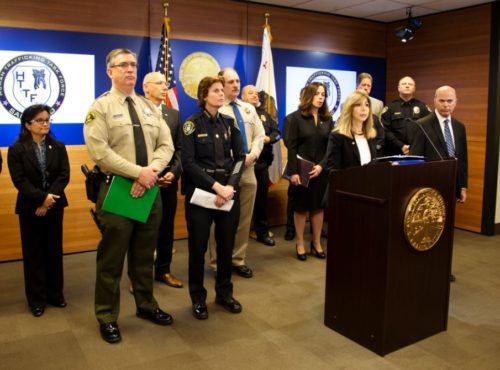 SAN DIEGO–The San Diego Human Trafficking Task Force today announced the results of a multi-agency operation across the state of California to stop the sexual exploitation of young women and girls.

There were three goals of the operation. First, disrupt the demand for these vulnerable victims by targeting their buyers. Second, identify and arrest their captors, and seek successful prosecutions against them. And third, identify and recover victims of sexual slavery and human trafficking and provide them with much needed services.

Although this was the third annual Operation Reclaim and Rebuild, this is the first one which incorporated law enforcement from throughout the state. The operation was a collaborative effort between the San Diego Human Trafficking Task Force and the Los Angeles Regional Human Trafficking Task Force. In San Diego County, the operation involved more than 160 personnel from 18 different law enforcement agencies.

This Operation took aim at the demand side of human trafficking, focusing on the buyers who shop for sex online. Fake ads for sex were posted online offering sex for money. When the men showed up at a hotel expecting to buy a person for their own sexual gratification, they arrested and booked into jail where they stayed until they could post bail.

Eight individuals were arrested and charged with prostitution.  Service providers will be reaching out to those women with help to get out of the life of prostitution and exploitation.  One man was charged with human trafficking. Six people were arrested on drug, or weapons related charges, including one man who had 10 pound of marijuana in his possession and 4-thousand dollars cash.

The other aspect of the operation focused on rescuing victims of human trafficking. Law enforcement worked to identify, and make contact with adults and juveniles being exploited by their traffickers. As a result, two individuals were rescued, including a 16-year old girl.

A recent study showed the underground sex industry in San Diego is about an $810 million business each year.

Partner agencies who participated in Operation Reclaim and Build under the umbrella of the San Diego Human Trafficking Task Force include: