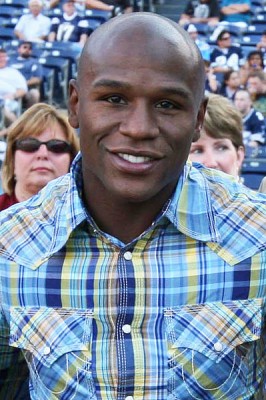 There are few individuals that can earn millions of dollars within minutes. How about this. According to Golden Boy’s boxing promoter Richard Schaefer, Flyod Mayweather Jr., will earn a guaranteed purse of $41.5 Million Dollars for his upcoming Sept. 14, 2013, junior middleweight unification fight with Saul “Canelo” Alvarez. The event will take place at the MGM Grand in Las Vegas. This is the biggest payday in boxing history for a professional a boxer.

There is no question this is the top fight of 2013. Floyd Mayweather Jr., the undefeated champion, with a record of 44 wins and 0 losses is being well paid for his efforts. During his boxing career, which has spanned over 18 years, he has held 9 major world titles in 5 different boxing divisions. Of his 44 wins, 26 have been by way of knockout. At age 36, he still has the speed, skills and stamina to be one of the few boxers in history to never have been defeated.

Floyd’s opponent is a rising star from Mexico, Saul ‘Canelo’ Alvarez, who also boasts to never having lost a fight. He enters the ring with a professional boxing record of 42 wins, no losses and 1 draw. The 23 year old Canelo turned professional at age of 13 and may prove to be Mayweather’s toughest opponent to date. While there are no official reports of his paycheck for his fight with Mayweather, rumors in the industry indicate Canelo’s contract should yield him about $9 million dollars. Not shabby at all.

For a sport that many critics have said for years ‘was dead’ there is certainly much money circulating between boxers, promoters, sponsors and other supporting industries that keep the sport alive and well.

The only way one can view the fight is either live at MGM Grand, or via ‘pay-per-view.’ The cost to watch the event on TV is $65.00 per subscriber, and $75.00 per subscriber if you want to view it HD. With well over 1 million fans expected to purchase the event, ShowTime cable TV network which will carry the fight, will also be a winner.

By the way, Mayweather will also receive an undisclosed percent of the live ticket sales and ‘pay-per-view’ subscribers. Now we know why his nickname is ‘Money May.’