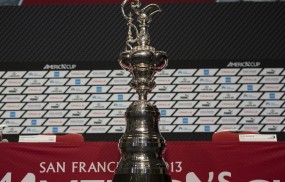 The “September Showdown” for the 34th America’s Cup begins this weekend. Oracle Team USA skipper Jimmy Spithill has cast his team as the underdog. Emirates Team New Zealand skipper Dean Barker says nothing less than victory will do. Such are the storylines for the defender and challenger with the biggest race of their lives set to begin Saturday.

“Anytime you’re the defender, there’s a target on your back,” said the 34-year-old Spithill. “The challengers get together and their goal is simple: They want to come out, knock you out and take the America’s Cup off you. No matter what games transpire on shore, to take the trophy you have to win on the water. That’s what we’re looking for, to get on the water and go racing.”

“I think both teams are ramping up to rip into it on Saturday,” said the 41-year-old Barker. “We’re very keen to get racing and I’m sure they are as well. It’s going to be a very, very interesting first weekend to try to get a feel for how the two boats shape up. Whether there are differences upwind, downwind, maneuvering, starting; all the different aspects we try to evaluate in house, that’ll all become reasonably apparent after the first four races.”

Spithill and Barker are familiar foes, having raced against each other for many years. And the two teams have long tenures in the America’s Cup arena: Emirates Team New Zealand can trace its genesis to the 1987 Cup off Fremantle, Western Australia. Oracle Team USA has been racing since the 2003 Cup in Auckland, New Zealand. Collectively they’ve won the America’s Cup three times with Oracle Team USA winning most recently in 2010 and Emirates Team New Zealand winning in 1995 and 2000.

The first race is scheduled to start at 1:15 pm PT on Saturday. It’s always a special day, one that’s eagerly anticipated by the fans, who are keen to see the two crews line up against each other. It’s also a day filled with anxiety for the teams. “Are we fast enough?” is the common thought for the racing sailors on the way to the start line. Each team, of course, has an idea, an inkling of what lies in store, but neither really knows what the other has up its sleeve.

That unknown is amplified in this Cup because of the new class of boat, the AC72. A development class, the AC72 features wing sails and hydrofoils that enable it to reach speeds in excess of 45 knots (52 mph/83 kph). Those speeds are previously unheard of in America’s Cup racing. Reliability has been an issue in the challengers’ racing, but that’s because it is a very complex boat. It shouldn’t be an issue for these teams. Oracle Team USA has logged more than 110 days on the water and today is the Kiwis’ 100th day sailing.

“I think the development of both teams’ boats has effectively come to the pointy end of the spear,” said Emirates Team New Zealand wing trimmer Glenn Ashby. “We’ve come from one direction, they’ve come from another, but foil wise, aerodynamically, both boats are quite evenly matched, and I think the sailing teams are evenly matched as well.”

Oracle Team USA may or may not be an underdog, but Spithill does have in his crew one of the most experienced sailors to ever race on San Francisco Bay, tactician John Kostecki. Kostecki estimates he’s raced on the Bay for more than 45 years, and labels it one of the best sailing venues in the world.

“It’s fantastic to have the America’s Cup here on the waters where I grew up sailing,” said Kostecki. “It’s an incredible venue – great seabreezes, tricky course conditions with currents changing every day, the winds change every day, and you can view the course from all over the Bay area. So for me personally, it’s one of the best venues in the world for this type of event.”

Internationally, the America’s Cup Final can be viewed in more than 170 territories. All racing is also live on America’s Cup YouTube channel. (subject to territorial restrictions).

The winner of the 34th America’s Cup will be the first to win 9 points. For the Kiwis that means nine race wins and for Oracle Team USA it means 11, due to a penalty imposed by the International Jury. Racing is scheduled for Saturdays, Sundays, Tuesdays and Thursdays, with two races per day scheduled to start at 1:15 and 2:15 pm PT.