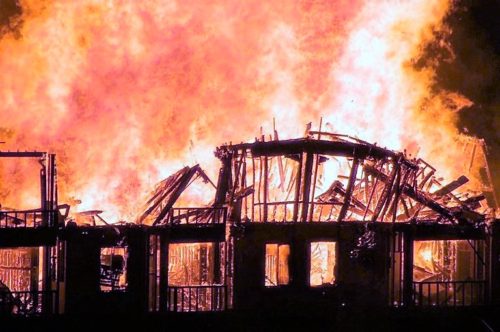 SAN DIEGO–The FBI is offering a reward of up to $25,000 for information leading to the identification, arrest, and conviction of the individual(s) responsible for a series of arsons where several residential condominium complexes were destroyed in La Jolla and San Diego..

On August 1, 2003, at approximately 3 a.m., a La Jolla residential condominium complex construction site with an estimated value of $50 million was totally destroyed by fire. A large white cloth with the message “If you build it—we will build it we will burn it the elf’s are mad” was left at the scene.

In addition, on September 19, 2003, in San Diego, two separate new home sites were also destroyed. Four completed homes at the two sites were completely destroyed, and two others were damaged. The estimated value lost at these sites was $3 million. Multiple ELF banners, similar to the one found on August 1, 2003, were left at both fire scenes. One banner stated, “Environmental murder. Nature demands justice. The E.L.F.s are mad.”

Fortunately, no injuries occurred at the scenes of these arsons. In La Jolla, hundreds of nearby residents were evacuated.

Earth Liberation Front (ELF), a radical international environmental group which advocated direct action through economic sabotage to stop the destruction of the natural environment, claimed responsibility. The FBI considers the case to be acts of domestic terrorism.

Anyone with information regarding these crimes should contact the FBI at 1-800-CALL-FBI (225-5324), or submit a tip online via tips.fbi.gov. All information will be kept strictly confidential.