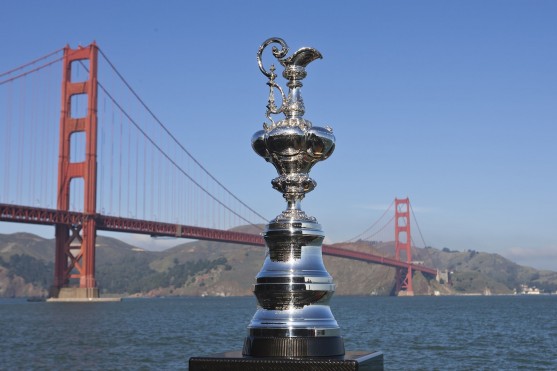 SAN FRANCISCO–The program for the 2013 America’s Cup season in San Francisco will include up to 55 days of racing in the Louis Vuitton Cup, America’s Cup Finals and Red Bull Youth America’s Cup as four teams take up the challenge against Oracle Team USA, the defender.

With the passing of the challenge deadline at midnight on August 1, the team line-up for the Louis Vuitton Cup is set. The challenging teams for the 34th America’s Cup are a formidable foursome and collectively as strong a group as any Defender has faced since the beginning of the multi-challenger era of the Cup in 1970.

“The four challengers who will take on the 34th America’s Cup are an imposing group,” said Regatta Director Iain Murray. “They are talented, they know how to win, and they will be a threat to the defender.”

Running from July 4 through September 1, the Louis Vuitton Cup will provide two full months of racing on San Francisco Bay.

In parallel to the challenger series, Oracle Team USA will hold Defender Trials to strengthen its bid to defend the Cup. Jimmy Spithill, the skipper of Oracle Team USA when it won the Cup in 2010, will helm one of the boats, while Ben Ainslie, the multiple Olympic Gold Medalist from the UK will helm the other. They will go head to head on the same racetrack and on the same days as the Louis Vuitton Cup challengers.

The America’s Cup Finals, with Oracle Team USA against the winner of the Louis Vuitton Cup, will run from September 7 to September 22 and features a new format with nearly twice as much racing. Previous Cup Finals have seen the teams race in a ‘first to five’ format, where the winning team needed to collect five victories. In 2013, there will be two races per day, with nine victories required to win the America’s Cup.

In between the Louis Vuitton Cup and America’s Cup Finals the future stars of the sport will take to the water in the Red Bull Youth America’s Cup.

“The amount of racing we’re going to have on San Francisco Bay next summer is simply phenomenal,” said Stephen Barclay, the CEO of the 34th America’s Cup. “The competition is going to be spectacular, the racing will be close, and spectators will be a part of the action with the shoreline along the city front literally making up one of the race course boundaries.”

The AC Village for the 2013 season will be at Piers 27-29 and is currently under construction.

The first Cup racing in San Francisco will take place later this month with the first event of the 2012-13 AC World Series from August 21-26, with up to 11 crews competing. The AC Village for August will be at Marina Green. Racing on Sunday August 26 will be broadcast live, coast to coast in the United States, on NBC, from 11:30 a.m. to 1:00 p.m. PDT.