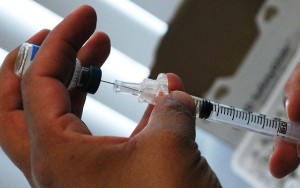 The agency says 26 San Diegans have died from influenza, compared to 84 at the same time last year. The ages of those who have died this season ranged from 41 to 95, and four had no known underlying medical conditions.

Influenza continues to take lives, especially those who are at higher risk of developing complications from the illness,” said Wilma Wooten, M.D., M.P.H., County public health officer. “Since influenza cases are reported through the spring, and even into the summer, people should still get vaccina

The number of lab-confirmed flu cases dropped for the first time last week after several weeks of continued increases. A total of 864 cases were reported for the week ending March 5, compared to 967 cases reported the previous week.