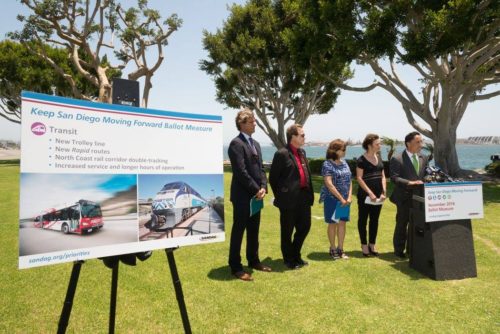 SAN DIEGO–Three mayors and two city councilmembers – all of whom have placed the environment among their highest priorities – gathered Monday near San Diego Bay to outline the unprecedented investment a proposed tax measure would make in transit, open space, and biking/walking region wide if it is approved by voters in November.

Part of the funds raised by the ballot measure would pay for a land management program to help reduce wildfire risk. The program would remove invasive plants (which fuel devastating wildfires) and promote fire safety management of open space.

“This measure also funds a new trolley line, dedicates $7.5 billion to transit, and half a billion dollars for bike and pedestrian projects. It can drastically increase the frequency of existing bus and trolley lines in the county starting on day one,” said San Diego City Councilmember Todd Gloria, chair of the SANDAG Transportation Committee. “We need to provide more choices for how people get around this region to stop and reverse the devastating effects of climate change on our environment.”

The measure being prepared at the direction of the SANDAG Board would increase the sales tax by a half cent, raising $18 billion over 40 years for local and regional infrastructure and programs. Of that, more than $10 billion would go directly into projects that preserve the environment and cut greenhouse gas emissions, including transit projects ($7.5B), buying and preserving open space ($2B), and bike/pedestrian improvements ($540M).

“This measure would provide the funds needed to build a major new trolley line from the international border, up along Interstate 805 through Chula Vista, and on to Kearny Mesa,” Salas said. “Without this measure, that project will not get done – or, at best, it will be done several decades from now.”

Heebner added: “Open space is not just in our back country. A string of lagoons adorn North County’s coast – they are the kind of amazing resources these funds will help preserve and enhance.”

The SANDAG Board, made up of elected officials from all 18 of the region’s cities and the County Board of Supervisors, is developing the measure, with robust input from the public, for placement on the November ballot. It will require two-thirds approval of voters countywide to pass.

“This is a practical way to enhance our communities and reach our environmental goals, including meeting and exceeding our state mandated greenhouse gas reduction targets,” Morrison said. “With this approach, we can truly make a difference in the relative short term – with major benefits starting immediately and continuing to come online over the next 10 to 15 years.”

The expenditure plan in the measure also includes $4.3 billion to be distributed to the cities and the county by formula to be used on local projects and programs. That could include projects such as filling potholes and fixing bridges, as well as increasing local transit service and enhancing storm water treatment facilities. The measure also includes about $1 billion for separating trains tracks from regular traffic and for synchronizing traffic signals on major streets.

“This measure will bring real benefits to my community and to our environment as a whole,” Dedina said. “More frequent trolley service. More Rapid transit. More open space. And funds my city council can put to use on things like protecting our coast.”

In addition, 14 percent of the funds – $2.5 billion – would go toward highway and connector projects, largely dedicated to carpool/Express Lanes projects in order to create free flow for transit and rideshare vehicles.