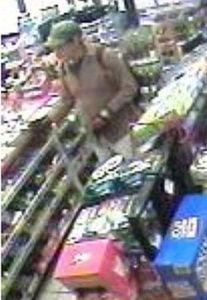 Authorities release an image of a man considered a person of interest in the attacks of homeless men in San Diego.

SAN DIEGO–Crime Stoppers and San Diego police homicide investigators are asking for assistance from the public to help identify and locate the suspect responsible for two homicides and a third violent attack involving the homeless.

On July 3, at approximately 8:06 a.m., police officers and fire personnel received a call of a fire in the area of 2700 Morena Boulevard. Fire personnel and Police Officers responded and discovered a body on fire between Northbound Interstate 5 and the train tracks. Fire personnel extinguished the blaze and discovered the deceased and badly burned body of a male adult.

On Monday at approximately 4:51 a.m., San Diego police received a 911 call of a person down and bleeding in the 3700 block of Greenwood Street. When officers arrived on scene, they located an adult male with trauma to his upper torso. The victim was transported to a nearby hospital with life threatening injuries.

Later that morning, at approximately 6:10 a.m., a San Diego police officer was flagged down in the 2500 block of Bacon Street regarding a person down and bleeding from his upper torso. When officers arrived on scene, they located a deceased adult male with trauma to his upper torso.

These attacks have occurred in the early morning hours and investigators urge the public to report  any suspicious behavior they see.  Investigators are also asking that the public spread the word  to the homeless population to remain vigilant, avoid sleeping alone, and to stay in open, well lit areas.