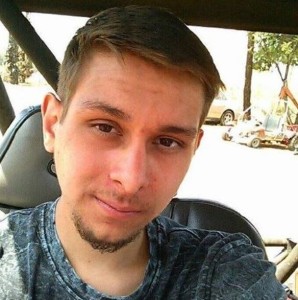 Elijah Bear Diaz, 20,  a Native American male and a member of the Barona Indian Tribe, was last seen on August 29, 2015 when he was dropped off, at approximately 10 p.m. by his mother, at his residence on Joey Lane in El Cajon. She reported him missing the following day. During the investigation, El Cajon police detectives discovered that Elijah’s cell phone had been turned off on August 30. His 50 inch television was missing from his bedroom along with bed sheets and the contents of a safe.

He is diabetic and, at the time he was reported missing, was using crutches to move around due to a slow healing injury on his left foot. He has had no contact with his family or friends, and has not used social media since he was reported missing.  There has been no activity on Elijah’s bank account and he has missed the last three tribal member checks from the Barona Tribe.  At this time police do not know if Diaz is voluntarily missing, or if he has been a victim of foul play.

Anyone with information regarding the whereabouts of Elijah Bear Diaz is asked to call Detective Barber of the El Cajon Police Department’s Crimes of Violence Unit at (619) 441-5530. You can also call the Crime Stoppers anonymous tip line at (888) 580-8477.  Anonymous email and text messages can be sent in via www.sdcrimestoppers.org