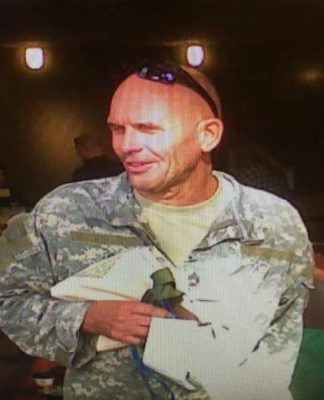 ENCINITAS–Crime Stoppers and investigators from the North Coastal Sheriff’s Station are asking for the public’s help to locate an unknown suspect wanted in connection with a stolen vehicle and identity theft that occurred in Encinitas.

On Monday at about 11:30 a.m., the suspect stole a Kia rental car from 2050 South Coast Highway 101, across from the San Elijo Campground in Encinitas. The vehicle was recovered a short time later, but several items were stolen from the car to include two surfboards, an IPad, $500 in cash and the victim’s wallet with credit cards. The suspect fraudulently charged over $3000 on the stolen credit cards at various locations in Encinitas.

The suspect is described as a white male, between 35 to 45-years-old, standing about six feet tall, and weighing 180 pounds. He had a shaved head, was unshaven and was last seen wearing a camouflage shirt and pants. He was wearing a flip flop on his right foot and no shoe on his left foot. He walked with a limp.

He was last seen driving a blue Hyundai Tucson with yellow paper plates on both the front and rear license plate holders.